It’s an odd thing to stake a claim as something of an expert when it comes to Las Vegas buffets…especially when you weigh in at under 200 lbs…but why hide it? I’m probably one of the few people on the planet to have dined at virtually all of the casino-resort buffets, typically in the course of research (see my Orbitz.com Top Ten Buffets, most of which I believe still holds accurate, with the exception of Mirage’s Cravings, about which I’ve heard too many complaints) but occasionally just in the pursuit of a quick, effortless meal. Which is largely the point of these casino smorgasbords, at least historically, as I noted in another piece I wrote on the topic for the Las Vegas Weekly.

Though many critics and gourmands tend to dismiss them—and certainly with valid reasoning—buffets obviously continue to be popular with visitors, otherwise newer resorts like Aria and the Cosmopolitan wouldn’t invest in them (in fact, it’s almost more intriguing to note which Strip resorts don’t have buffets: New York New York, Mandarin Oriental, Vdara, Bally’s, Venetian/Palazzo, Stratosphere; Tropicana now only offers a limited buffet for breakfast). And the Cosmopolitan in particular has certainly invested in the Wicked Spoon, a quite elegant entry into buffet land, marked by modern design and polished wood tables that wouldn’t look out of place in any fine dining scenario. 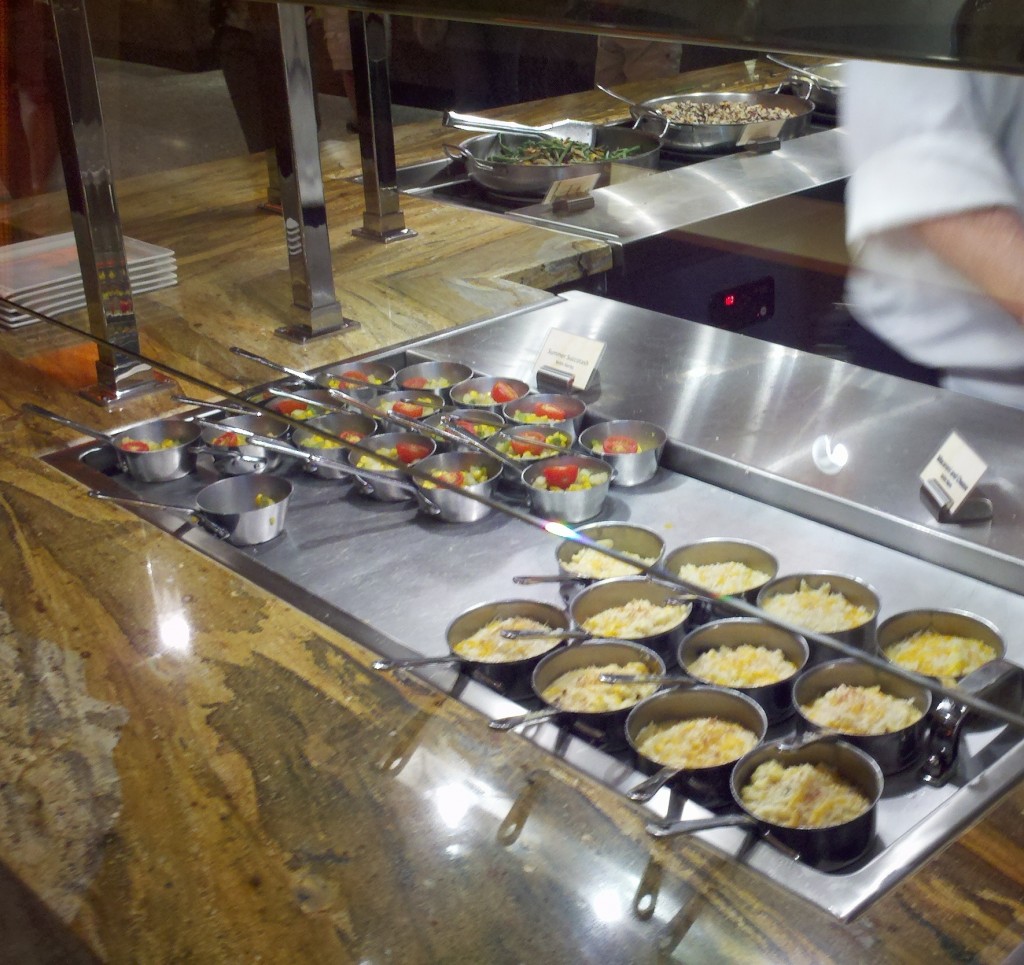 Some of those small pans that are Wicked Spoon's signature... (they should have tip jars for the dishwashers!)

Their main aesthetic distinction—to offer many selections in small-portion china and cute metal pans-is also a serious investment, not just in hardware but also in labor cost in serving and cleaning (as well as making sure people aren’t swiping those cute little sauciers). One might presume the point would be to limit how much you can eat, but I suspect it has more to do with curtailing the typical buffet behavior of piling your plate high with food, and then not finishing, letting it go to waste. That’s as much an ecological issue as it an economic one, and in that aspect, I applaud the Cosmopolitan for the gesture.

But enough musing: It’s interesting to note that of all the places I eat and tweet about, none has aroused more curiosity than Wicked Spoon, so I’m sorry it took over a week to post a full blog.

Typically, I’ve reviewed buffets during weekday dinner service, since it’s their most full array of offerings, without anything special added. But for Wicked Spoon, I went during Sunday brunch, assuming I’d get a bit of what’s available during breakfast, lunch and dinner. I think that held true.

Overall, most of what Wicked Spoon offers doesn’t stray far from the basic buffet formula: standard American breakfast offerings, cold salads, an ample carving station, Mexican, Italian and Asian items, some fish, and lots of decadent desserts. It’s the product quality, overall, and the execution, that sets this apart.

One could argue two cold u-16/20 shrimp in cocktail sauce is not really “shrimp cocktail,” but they are fresh and properly cooked. The salad station also features a couple of gazpachos, some ceviches and cold fish, several fine cheeses, fresh-sliced salumi, gorgeous heirloom tomatoes (likely seasonal) and most impressively, fresh burrata with watercress that any restaurant would be proud to serve—one of a handful of dishes here that’s worth the price of admission alone (as long as you eat as much of it as you can!). 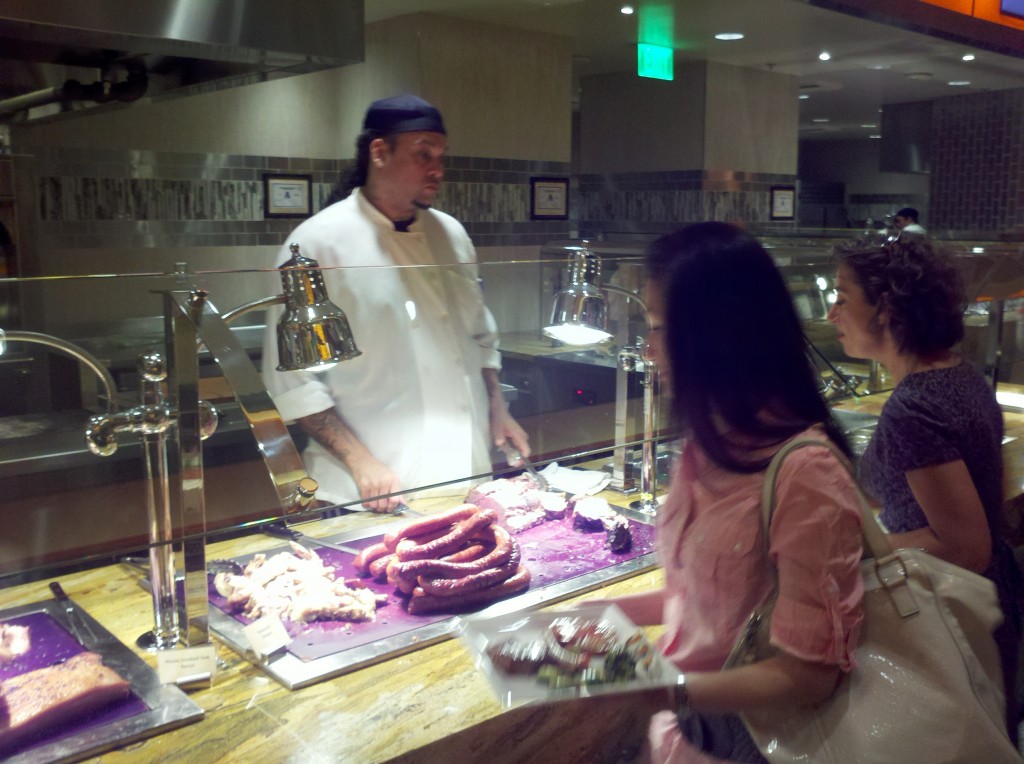 The carving station is even more well-achieved: Virginia ham, prime rib, Andouille sausage, turkey, and yes, slab bacon (that’s a first) are all good, juicy and fresh. And beside them, served two pieces to a pan, is “Wicked” fried chicken. Even most buffet boosters will admit fried chicken is rarely a go-to, but these spice coated pieces were moist, crispy and flavorful, really pretty great. Get two. At least. 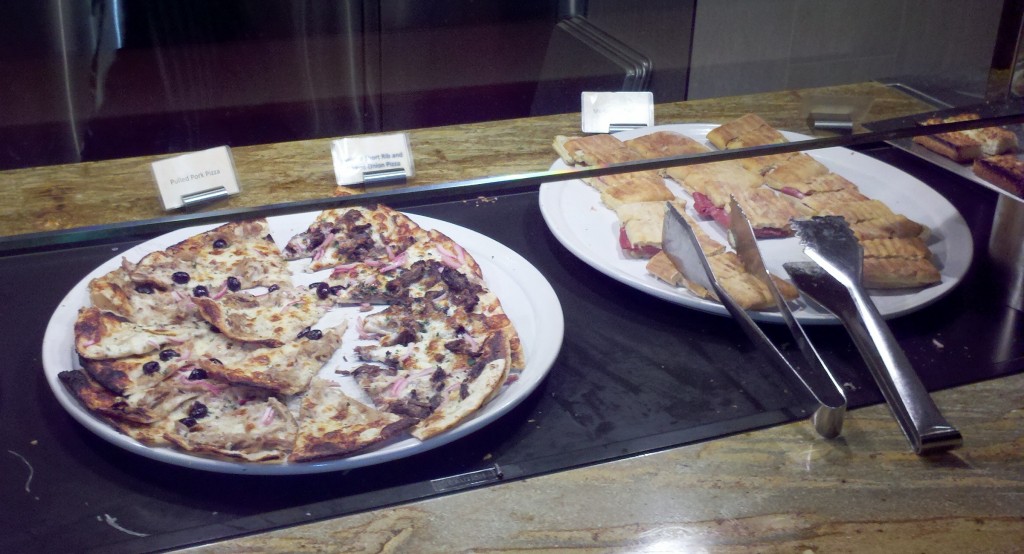 In the Italian section, standouts include creamy/earthy mascarpone polenta with mushrooms (it’s not Scott Conant’s, but it ain’t bad), cavatelli with short rib, and some creative thin crust pizzas—short ribs (again) abd pulled pork among the toppings. The latter was more interesting than inspiring, but really, who goes to a buffet for pizza (and if you’re going to the Cosmo and eating pizza anywhere but D.O.C.G. or the nameless joint, you should be spanked)? 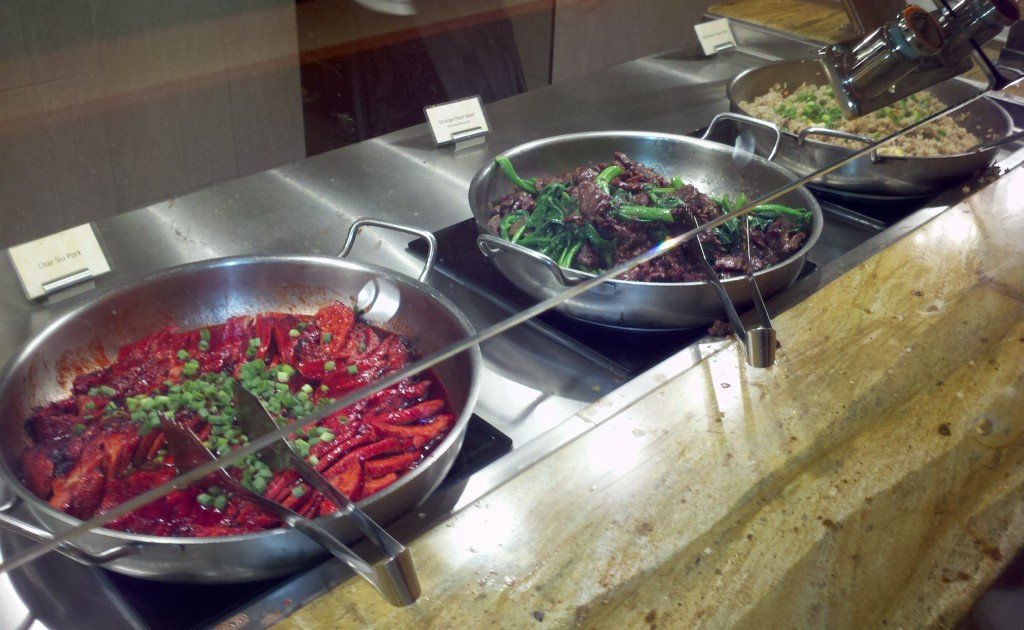 Asian offerings include some of the best char siu pork I’ve ever had—bright red, but uncommonly tender; red curry vegetables with tofu that were light on the vegetables but flavorful regardless; General’s chicken that was crispy, lightly breaded and altogether better than it should be, as well as decent pork belly fried rice and some Korean short ribs that looked good, but also involve more work than I wanted to invest. 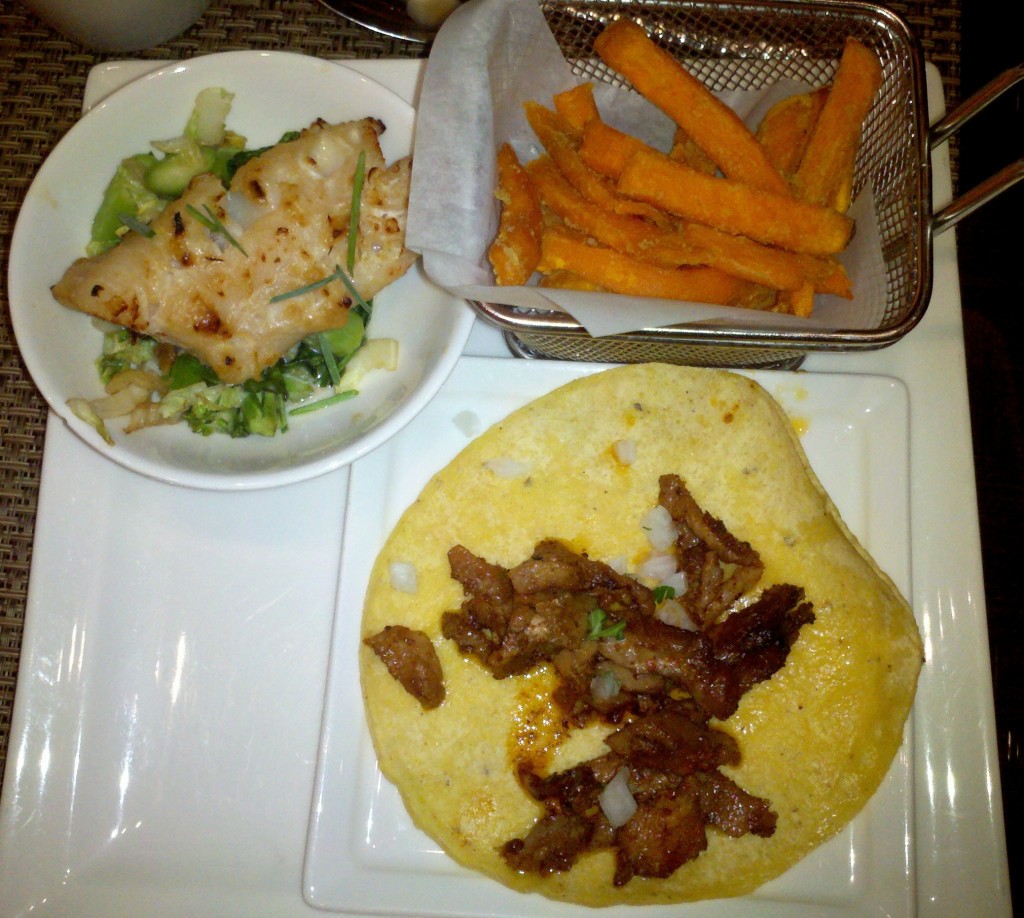 A few other nice discoveries were lemongrass cod with asparagus (cooked fish is usually the weakest link in any buffet), crispy sweet potato fries, ratatouille, and a succotash that was perfect, really.

And then there’s dessert: several fudges and barks (that’s another first), dipped strawberries and  marshmallows, all kinds of pretty parfaits and pastries, so tiny you can sample, crumbles and chocolate bread pudding in pans, and16 gelato flavors served in mini-cones. I showed restraint but enjoyed a scoop of creamy, dense, fresh-tasting pistachio gelato. 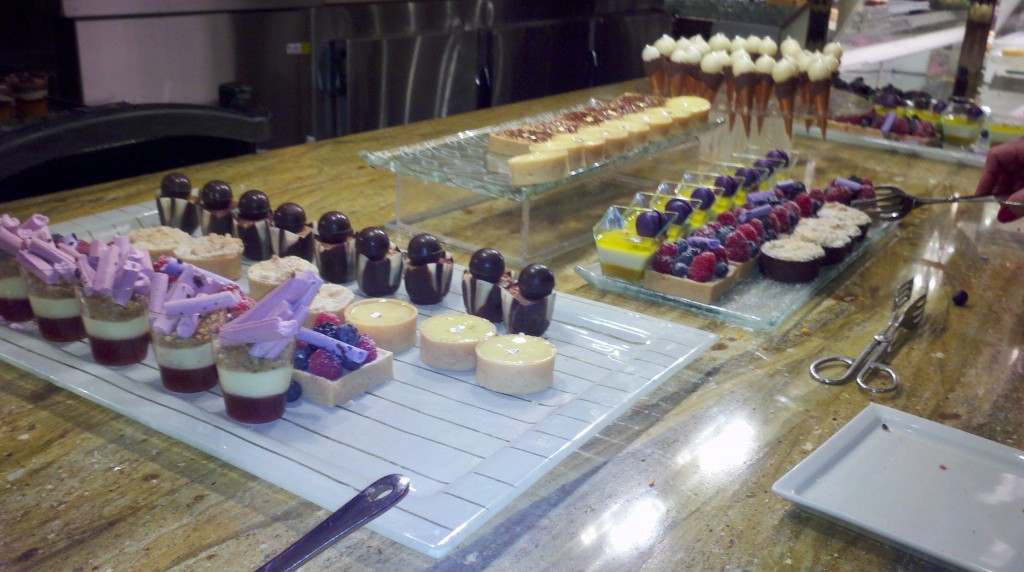 There are some weak spots, of course. The tacos al pastor were virtually flavorless, as was ceviche. The pastas in pans were nice, but pesto separates when it’s kept warm (as it did on the gnocchi) and the mac’n’cheese was lukewarm. Sushi rolls here look nice but are also ridiculously bland. There’s an attempt at Asian noodle soups (ramen/pho, whatever) but it’s kind of a joke. And what was labeled as a Caesar salad definitely wasn’t (unless bacon is a part of the recipe I’ve been missing all these years), though I enjoyed it anyway.

The end result is that Wicked Spoon is definitely in the “upper echelon” of Vegas Buffets—and if you’re wondering what company I’m referring to, it’s Bellagio, Wynn and M Resort. Period (there are other certainly acceptable buffets, but none that really aspire to the level of quality and quantity of these folks). Just to make some comparisons, overall Bellagio has by far the best sushi and salads; Wynn—which also does some small-portioning—has great soups, ceviches, and a gut-busting patisserie; M’s Studio B just has a massive array of everything, all very good, along with free beer/wine—and by far the lowest price points among this company. Wicked Spoon fits in well here, and is the most elegant and relatively intimate experience of them all. And I hasten to add, it had the best looking buffet crowd I’ve ever seen. I’m talking model-quality. Shocking, I admit (who knew they even ate, much less “all you can” ate?).

The bottom line with any buffet is that yes, obviously you are making a trade off of quality when you’re eating pre-made food vs. cooked to order. My biggest beef with buffets—and all of the best share this problem, including Wicked Spoon—is when you have to wait on a lengthy line to sit down. I’ve never understood the point of this (it always seems intentional on the part of the management to seat people slower than they could). To me the biggest attraction to a buffet, and it’s initial raison d’etre way back at the El Rancho in the 1940s, was that one could sit down and eat a meal more quickly than with normal service, in order to get back to the gaming tables, or whatever else you had planned. I have to be honest, if I had to wait more than 10 minutes in order to sit down at a buffet, even any of these great buffets, I wouldn’t do it.

Especially when you can grab a great slice of pizza right down the hall in a minute and a half.

Some of those small pans that are Wicked Spoon’s signature… (they should have tip jars for the dishwashers!)

Don’t ask me what these guys are smiling about