Pizza has always been one of those ‘Holy Grails’ of LA food… for some reason, it’s generally accepted that no one can get it “right” here, though what defines “right” is an equal matter of debate. There is also no small irony in the fact that Wolfgang Puck was the chef who really influenced the whole world to take pizza more seriously (and more creatively)—and he did that from LA’s own original Spago. But let’s leave cultural insecurities alone for a second and get to the table.

Having been raised on Connecticut and New York City pizza, and sampled it in Italy as well (though not in Napoli, pizza’s mecca, I confess), I feel I have a pretty solid grounding on the subject, as I’ve written previously. I can also say that the state of pizza in LA now is generally a lot better than it’s ever been, and not just because of Batali & Silverman’s Mozza.

Regardless, it was hard for me to resist the hue and cry of pizza freaks about Mother Dough, which opened on the finally happening stretch of Sunset Blvd. in Los Feliz a few months ago where Umami, Covell and a few other destination spots do biz. In a simple brick-walled space with an open kitchen featuring a Napolitano wood-burning oven, Mother Dough’s concept is direct and dripping with “authenticity:” Before the pizza even gets to that 850-degree oven, it’s made from fine 00 flour, risen without refrigeration, the yeast “mother” taken from the previous days’ dough. It’s imperfect, on purpose. Then it’s topped, naturally, with sauce from San Marzano tomatoes and Italian buffala mozzerella. So, obviously it’s perfect. Imperfectly perfect, that is. Because, you know, it’s correct.

When I arrived, I was pleased to find that the guy at the door was attitude-free, and that my friend had actually managed to get a table pretty much immediately. Did I mention it was a Saturday night? That would never happen at Casa Bianca… 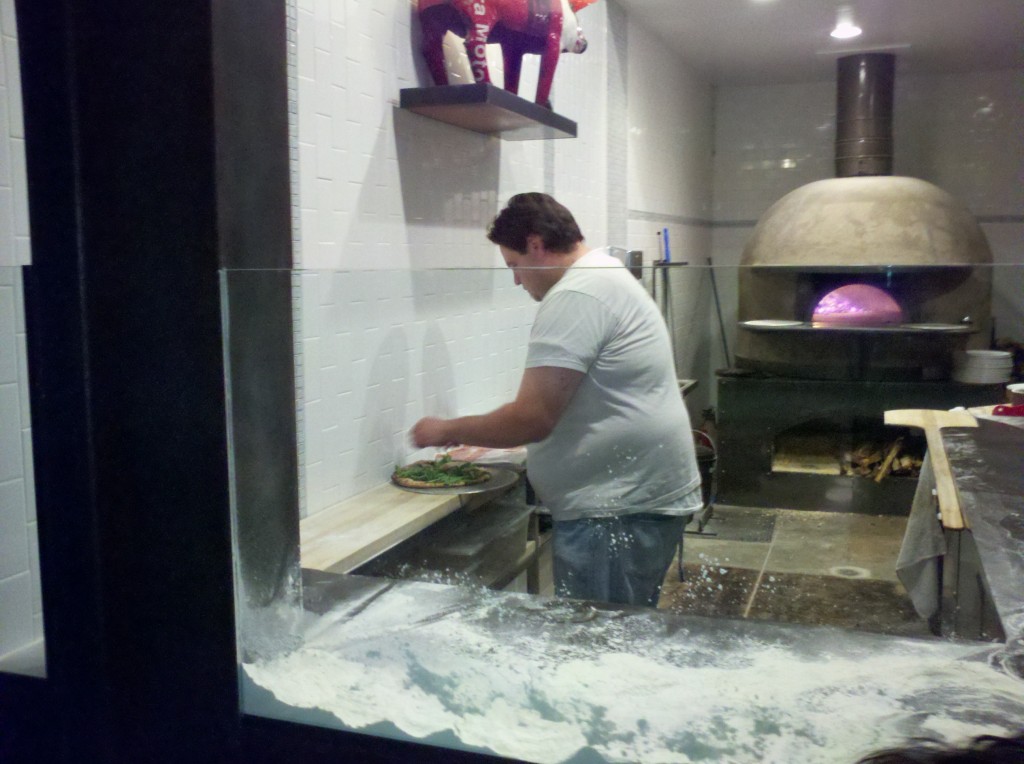 I want this guy making my pizza. #justsayin

The menu, which comes on replica butcher paper, is simple and direct as well, something I appreciate. There’s a margherita and four varieties available (two veggie-based and without sauce, two with meat), six starters and two desserts. I rarely do this, but since I know it makes a difference, I asked the server both where the burrata comes from, and the charcuterie (interesting that they used the French word, instead of the Italian ‘salume,’ but whatever). In this regard, I know I’m in the minority: most chefs and diners alike seem to have a softness for imported burrata and salume. I find fresh burrata and housemade salume far preferable (except proscuitto).

The server told me she would check, but that the chef was typically very secretive about his sources. I thought that was kind of weird and old school; these days, everyone brags about their sources. At any rate, she revealed that the burrata was imported from Italy (“because you can’t get buffalo mozzerella made here,” which isn’t true) and the salumi was from a variety of local purveyors. That got my interest, so we ordered the salumi—sorry, the charcuterie—to start, and my guest wanted the duck crostini as well. We ordered the pizza with whiskey fennel sausage, making it a meat-lovers meal.

An authentic Italian pizza calls for wine—nothing fancy mind you, just a nice medium-bodied red. A quartino of decent rosso would’ve been fine. Only, Mother Dough doesn’t have any quartinos. In fact, their modest wine list (which is to be expected) barely had any Italians on it, was equally divided between whites and reds, and only offered about six by the glass. Six. Including only Californian reds, which I knew wouldn’t pair well with pizza. It was an interesting list, but it bore no relation to the food being served.

Luckily, my friend had just been to the wine store and bought a Sicilian red which she offered to open. The server informed the corkage fee was $15. Fifteen dollar corkage?? In a pizza place? With less than 20 bottles on the list? There’s only one word for that, and it’s not polite at the dinner table. We opted for the one Barbera on the list, which was $35 for the bottle, reasonable (even if I’m sure that’s still a substantial mark up), but regardless, basically the only decent choice available. If the chef needs some recommendations on Italian reds, I’d be happy to guide him. Or, of course, he could walk down the block to Covell.

The starters arrived, a very pretty and nicely varied charcuterie, with a particularly yummy paprika-laced salami, a house-made dill goat cheese, pickled cipolini, two proscuittos, and a somewhat dry pate. All in all, very nice, though at $12 they could’ve toasted the bread to order.

Duck crostini, a thin layer of duck proscuitto over ricotta spread on three toasts, was disappointing, though. Ricotta dominated over duck, and it felt very insubstantial for $8. We ate it, don’t get me wrong, it just seemed  skimpy.

Then came pizza. Piping hot. Saucy. Fragrant. Imperfectly perfect. And, all of 12” big. I can’t recall the last time I was served a 12” pizza in a restaurant—14” seems pretty standard, as far as I can tell, for Napoli style. The whiskey fennel sausage was great, meaty and succulent, in chewy chunks, though again, maybe a little skimpy. The tomato sauce is fresh, bright and sweet. The crust is thin and fairly light, actually. A bit less chewy than I would expect, and not terribly substantial in the flavor department either.

Mother has answered your prayers.

Don’t get me wrong, it’s a nice pizza. But is it a godlike lifechanging pizza? No. And I have had such a thing, too. In fact, I’d venture to say I preferred a pizza from Antica in Marina Del Rey over this, and have had two better Napoli-style ones in Vegas as well. Did I mention that this one cost $18? Because, that’s more than a 14” one costs ON THE LAS VEGAS STRIP.

Service was friendly and efficient. No complaints there. 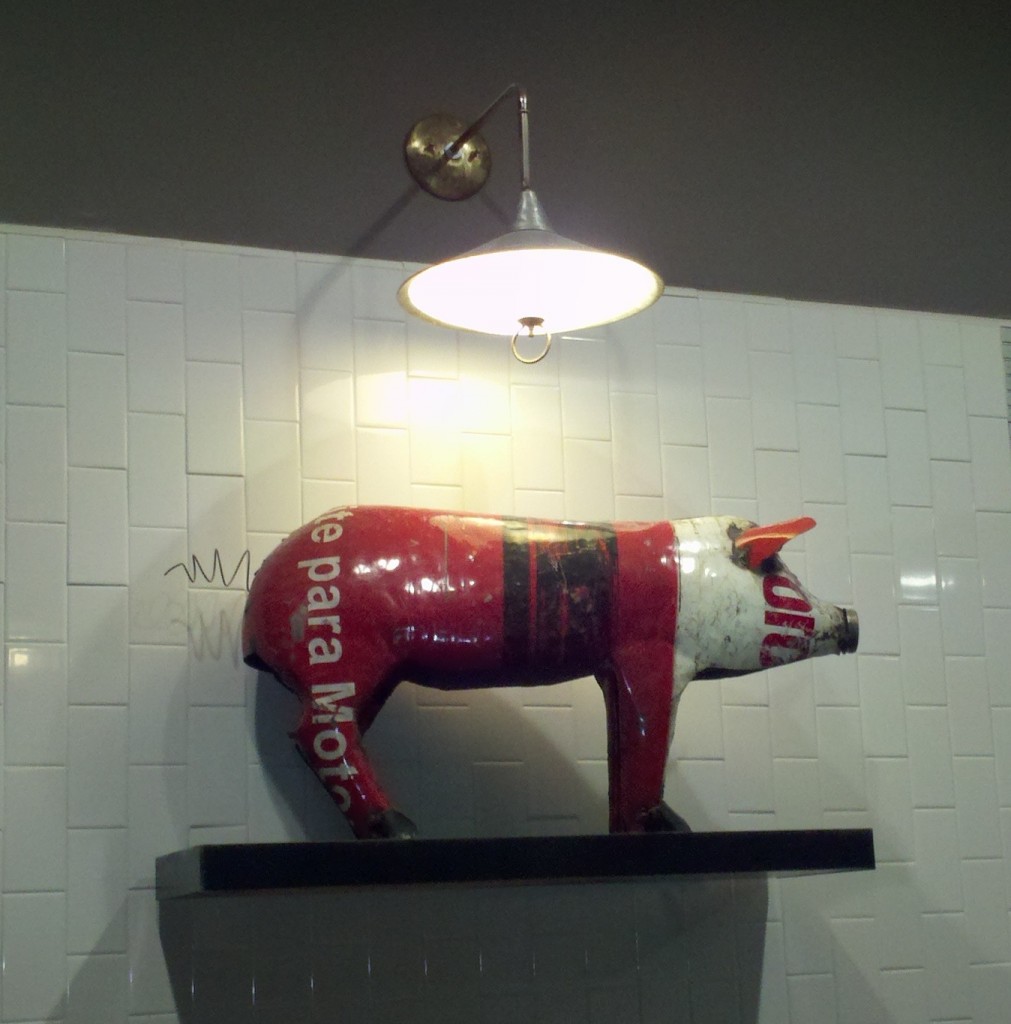