With all the talk of the new cuisine in Cosmopolitan, a few other smaller restaurant openings on the Las Vegas Strip this season have been largely overlooked. One is so hidden, you can hardly blame anyone for missing it: SEA Thai, in Bally’s–a resort that’s long suffered without any significant food updates. 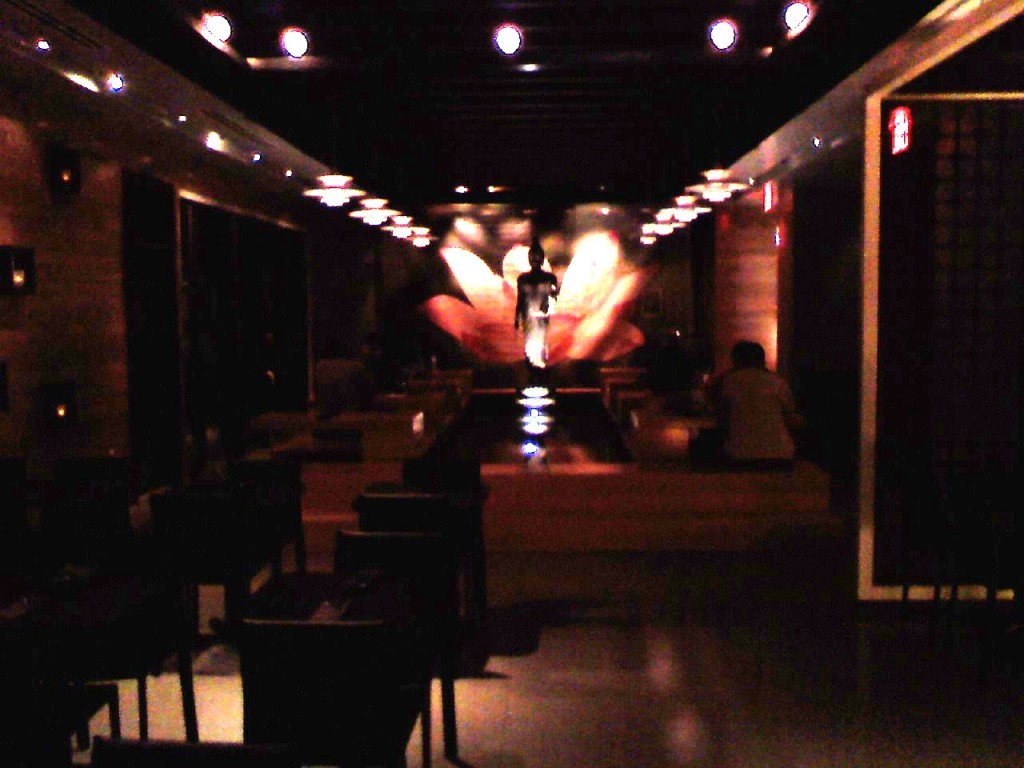 Nestled next to the Steakhouse, “SEA – The Thai Experience” (as it’s rather ostentatiously called, officially) is an outpost of an expansive chain around Metropolitan New York (including the peep, spice and Eat= restaurants), and befitting that background, the compact rectangular space combines modern and traditional décor to create an intimate but casual metropolitan-style environment. Beyond some funky-retro bubble chairs in the front, there are simple bare wood booths surrounding a pool reflecting a large Buddha statue, with a few more secluded booths to one side and a private dining room to the other. In a typical city this would be pleasant enough, but on a Strip full of huge spaces it’s uncommonly appealing (the Steakhouse’s intimate size is also one of its enduring strengths). I can’t imagine a more atractive spot for a casual but potentially romantic date.

Of course, the irony is that most of SEA’s spaces in NYC are very large and Vegas-flashy. Thankfully, the chain understands counter-programming. By the same token, SEA’s concept from the beginning has been to make no secret of their American-friendly twists on Thai cuisine. One can poke them for “inauthenticity” all you want, but then again, any US Thai restaurant is likely just as inauthentic when you consider that we don’t generally have the same fish available in America that they do in Thailand (it’s likely our land animals taste different as well), and that any cuisine is going to adapt to a different culture whether it’s trying or not. But that’s a whole ‘nother essay.

The shortcut on this subject is to say that I didn’t find SEA Thai’s dishes to be particularly “fusiony” or “dumbed down,” just prepared with a slightly stronger eye toward pretty presentation.

The menu, which actually offers Thai and Vietnamese dishes (on separate sides), covers the expected classic noodle dishes, salads and curries as well as house specialties—enough variety, but not so much as to be overwhelming, or exhaustively inclusive, as many Thai kitchens can be. Just the fact that they offer four kinds of rice–jasmine, brown, sticky and coconut—makes an impression.

From the Thai menu, I started with duck lettuce wraps, which were not Chinese-style lettuce wraps (as I expected) but spicy tender duck breast wrapped with steamed lettuce inside a spongy wrap bread (rice-based, I believe), and covered in two sauces—sweet, savory comfort food. Then I tried two Thai standards: a papaya salad, and an order of drunken noodles with shrimp and tofu. 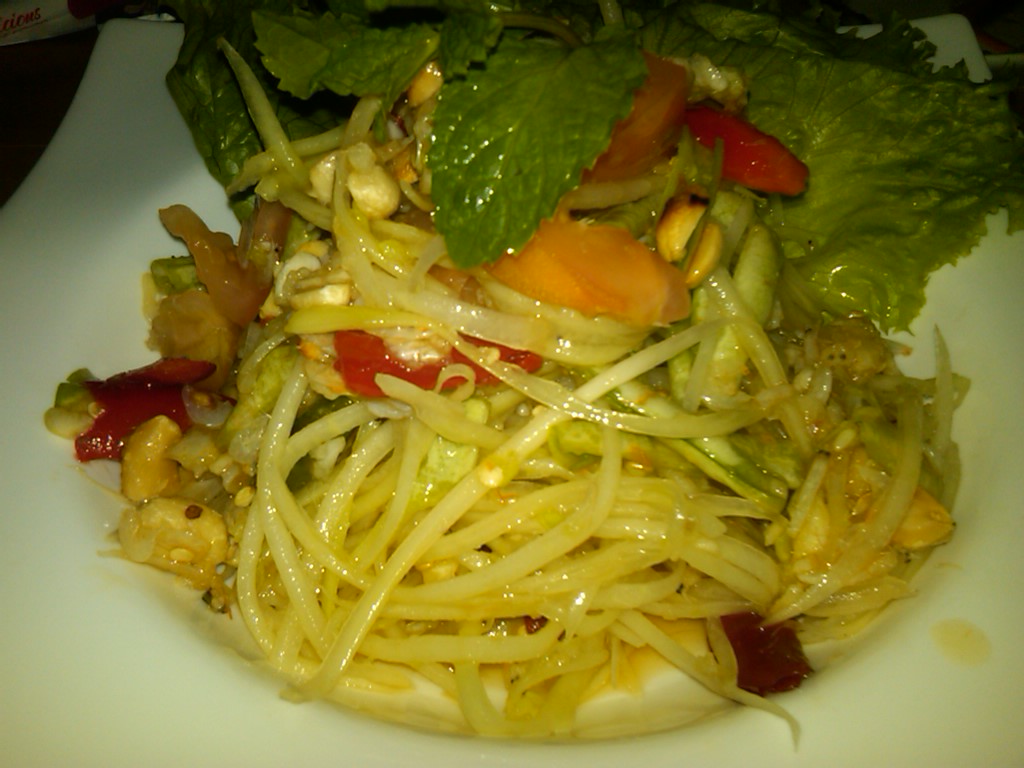 The papaya salad, I have to tell you, was everything it should’ve been: crispy, crunchy sweet and spicy, with all the ingredients finely juilenned, so the flavors mixed better than they typically do from a coarser chop. The drunken noodles had solid rad na and firm, flavorful tofu, and to be honest, I found myself returning to it as I sampled the following dishes—which is one of the most meaningful compliments a food reviewer can offer. 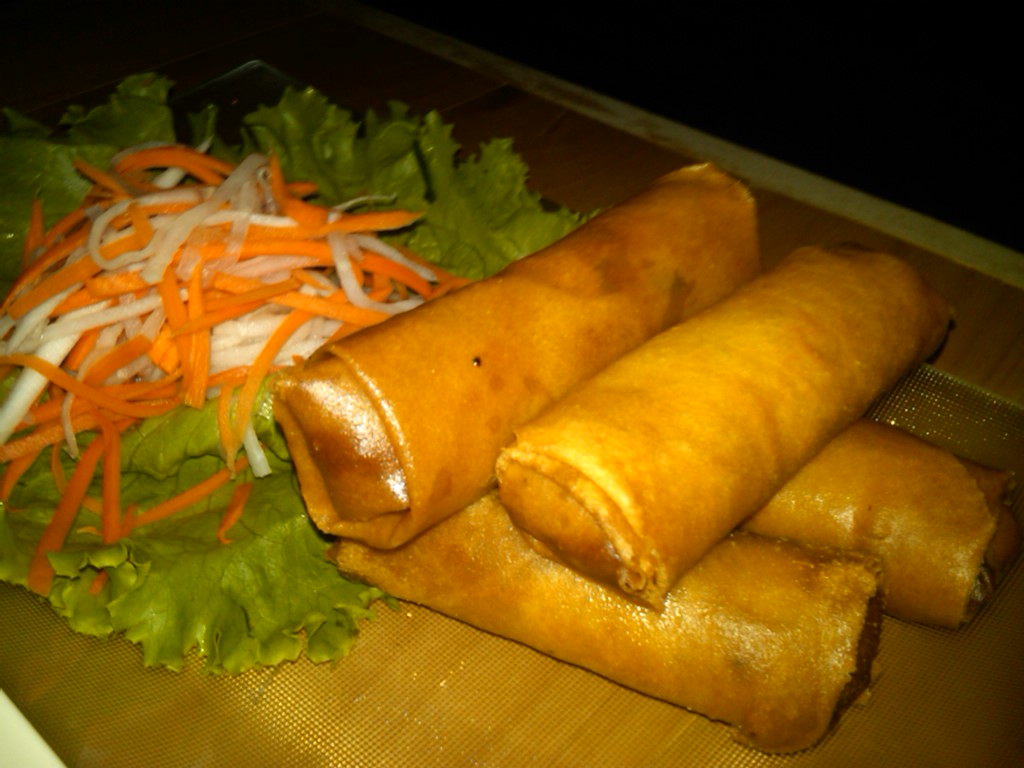 Viet spring rolls (as if you couldn't guess)

From the Viet side, I also stuck to a couple of standbys: spring rolls, which were typical, but delicately crisp and not too greasy, and a bowl of classic pho. The latter came to table not only generously portioned (which is typical) but with a large array of sauces and spices to season. That much again, made an impression. But the soup itself was just okay, nothing terribly special, the noodles just a bit overdone. There’s a lot of pho in Vegas–even a judicious amount on the Strip–so that’s a busy road to travel.

I’m not saying SEA Thai threatens Lotus of Siam or Archii’s to take Vegas’ local Thai crown (Nor does it supercede Wazuzu or Lemongrass on the Strip). But it certainly sidestepped the predictability I’ve felt in most American Thai restaurants for at least the past five years. Prices are not Spring Mountain cheap, but they’re not unreasonable. And staying open until 2 AM certainly makes it a preferable choice to the standard casino cafe.

The restaurant also offers some creative cocktails, but as I was visiting at lunchtime, I abstained. That’s enough of an excuse to make me plan a return, and try some of the kitchen’s more creative dishes.