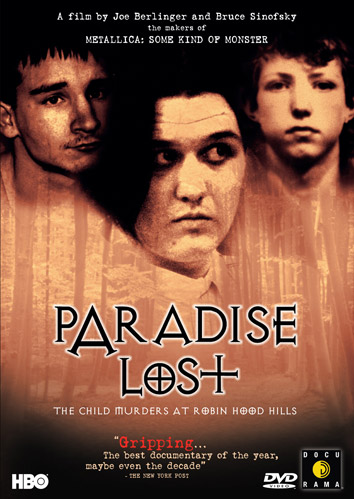 The recent release of the West Memphis three brought back memories for me. Back before my current career focus, I wrote a vanguard independent film column for Alternative Press magazine. One of the edgy, controversial films I was happy to champion was Paradise Lost, the documentary about the West Memphis Three that brought their story to light, even before Henry Rollins and others were championing them.

I will scan the original article as soon as I locate it, in the meantime, here’s the original text, submitted July 17, 1996:

Sub: The art of documentary film and “Non-fiction storytelling”

Despite the nominal success of such films as *Hoop Dreams* and *Roger And Me*, despite the proliferation of “reality-based” TV programming, despite the aping of documentary style in films like *Natural Born Killers* and *To Die For,* documentaries remain an underappreciated art and infotainment form.

When compared to blockbusters like *Independence Day,* Hollywood may have a point. But the films of Berlinger and his partner Bruce Sinofsky, who prefer the term “non-fiction storytelling” to “documentary,” neverless offer gripping drama for theatergoers.

Their new film *Paradise Lost,* which will appear in theaters at the end of September (after premiering at Sundance, and airing on HBO in June), is as harrowing a story as anything Hollywood could have dreamed up. An unintended sequel of sorts to their breakthrough *Brother’s Keeper,* *Paradise Lost*  begins seemingly as a “real-life *River’s Edge*”: In West Memphis, Arkansas, the bodies of three eight year old boys are found in a shallow creek, mutilated, drained of blood, and tied up with shoelaces. Three teenagers are arrested for the crime: a17-year-old with an IQ of 72, who gives a factually erred confession to the police, a mullet-wearing 16-year-old, and Damien Echols, 18, who wears black, listens to heavy metal and confesses a certain “interest” in Wicca, Steven King, and Anton LaVey.

As it progresses, the story begins to seem more like the Salem witch trials, in which questionably guilty parties are railroaded just for being outcasts. Myriad intrigues emerge as the two trials progress, particularly when one victim’s stepfather gives the filmmakers a knife which may have been used in the killings. Without any conclusive evidence, and much contradictory testimony from all sides, the three defendants are accused of a satanic ritual killing. Ultimately their convictions prove more about the town of West Memphis, and the American justice system than guilt or innocence.

“To go out into the real world, capture this kind of drama, edit it so that it makes sense dramatically, and is truthful, I think is harder than making a feature film,” says Berlinger, who worked with a crew of four people over a 10 month period, shooting 150 hours of footage on 16 millimeter and video, and spending even more time gaining interviewees’ trust than actually shooting them. “We had no idea where the story was going to take us, and it could have easily fallen apart.” *Paradise Lost* is long, at two and a half hours, but thankfully, never falls apart. It’s also the first film to feature the music of Metallica, who gave permission for free usage because they liked *Brother’s Keeper* and were interested in a story where their music is implicated.

Another documentary due late September in theaters (after premiering at Sundance) also implicates music as a guilty party. *Hype!* tells the story of the rise and fall (or at least, plateau) of Seattle grunge, mixing interviews and live performances from both the famous and lesser-known players of the most recent musical revolution, including Nirvana, Pearl Jam, Seaweed, Soundgarden, Screaming Trees, Supersuckers, Mudhoney, the Fastbacks,The Melvins, Gas Huffer and the Gits.

But more than the music, *Hype!* follows “the story about how America packages things,” as director Doug Pray puts it. Soonafter he began filming, Pray recalls, “Everywhere I turned grunge was on the cover of a magazine, grunge was everywhere, and the difference between what was there and what I was reading about was so striking.” Thus *Hype!* includes “grunge” fashion,  the “grunge” effect pedal, “grunge” pencils (from Seattle cartoonist Peter Bagge), Pearl Jam’s appearance as a Jeopardy question, Nirvana muzak, even Seattle band trading cards. It also reveals much about Sub Pop’s abilities to exploit the media, from the initial Everett True story which arguably started the furor, to Megan Jasper’s interview with the New York Times, in which she made up an entire lexicon of non-existent grunge jargon. “75% of what Bruce and Jon say is a lie” says Sub Pop publicist Nils Bernstein of his bosses Pavitt and Poneman, “but it’s served them well.” Behind-the-scenes players Jack Endino, Conrad Uno, Susan Silver and Charles Peterson are also interviewed.

Like Berlinger and Sinofsky, Pray, whose previous experience is limited mostly to music videos, Pray spent more time in the Seattle community (the entire process took three years) gaining trust than just shooting film. Sub Pop, of course, will be releasing the soundtrack.